I’ve finished painting the workshop! It has taken the better part of three days this week, but at least that job is now out of the way.

I wasn’t too happy with the rubbersied floor paint though. After two coats, the colour was fine, but the surface was a matt finish and attracted dirt. This was then very difficult to remove without mopping the floor.

I must admit I had never considered having to mop the workshop. Sweep it out every so often, yes, but a mop had never entered the equation.

There was almost two liters of the concrete sealant left over and so I tried brushing it onto the top of the paint to see if there was any effect.

It worked, sealing the floor and making it easy to sweep, so I have now brushed over the top of the paint. I hope it proves to be a hard wearing surface.

It’s late on Saturday the 9th May and I’m running late. Unusually I haven’t written a draft blog this week, so this is going out live, as it were.

We got through Tuesday, then the days seem to have accelerated until here we are on yet another Saturday evening. Just where does the time go?

The other thing this week, I have been running to keep up. Even today while Cvjetko was at lunch, I was cutting and installing drainage pipe, so upon his return he would not be held up.

It does mean that this week’s blog might be somewhat shorter than normal, even though we have covered a lot of ground during the week.

It also means there is less time to proof read, check and correct the prose so E&OE!

I mentioned last week that we were going to change the alignment of the steps from the courtyard up to the first floor level.

Well this has been completed. As I write this, the new reinforced concrete steps are slowly setting and will be ready for use tomorrow afternoon.

The old courtyard level is the bottom of the concrete shown in this photograph.

I have excavated the sandstone so it is now level. Soon I hope to have nice stone sets down.

It is technically not simple to add new concrete under the old to support it, so in discussions with Cvjetko I agreed that we would cut the old concrete back before building shuttering and pouring new in front.

One complication is that the rising water main runs along this piece of concrete.

It didn’t take long with the breaking hammers to demolish the old concrete and once started we decided to remove it completely. The steps came next.

In total there was 2½ m³ of spoil taken to the municipal tip from these first demolition efforts.

The shuttering was then built and a complete four meter wall of concrete was poured from courtyard level up to the same level as the old. At the same time the old uninsulated water pipe was properly insulated before being covered in concrete.

This needed to be left for a day to dry before stage two started. After our work last week with the yellow wax chalk, building the formwork for the new steps was not too difficult, if a little time consuming.

By lunch time on Saturday everything was in place. 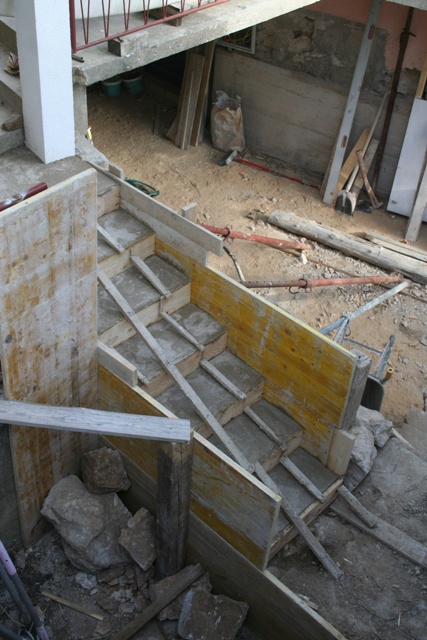 By 17:30 the new reinforced concrete steps had been poured and the work covered to prevent the felines adding their signature paw prints to the new work.

I have a list of jobs now for Sunday, including removing the covers, watering the new concrete to stop it drying too quickly and they will be usable by the afternoon.

We have had a problem on the next island, Brač this week. Thirty three cases of COVID-19 have been diagnosed and the whole island is quarantined.

It does show just how difficult the lifting of the lockdown is going to be.

Patient 1 had been to the main hospital in Split for minor surgery, and although testing negative, it seems he caught the virus there. He then passed it to a number of his friends and relatives, who have in turn passed it on themselves.

Once the news broke, there were several full ferries back to Split, before the quarantine was established – a lot of people running away from the threat. It remains to be seen whether any will have caught the virus.

Fortunately there is no ferry service between Brač and Hvar, but it illustrates the danger of travel and the unintended consequences of every day events.

I nipped into Stari Grad on Saturday for some urgent shopping. I had run out of eggs.

There were just five people in the supermarket, outnumbered by the staff. I have never seen the town so empty.

There was no one about, no parked cars, no vehicles moving. It was just like a film set ghost town, hot sun beating down on empty streets. Only the Tumbleweed was missing.

The daily temperature maximum this week has been over 25ºC, so we are quickly approaching normal summer temperatures.

Once again, I have seriously neglected the orchards. Doing a daily walk round, but that is about all.

The wild flowers between the various trees are in bloom, like this clump of what I thought were Crane’s Bills.

Only when I looked them up, they are clearly something different. Yes, they are a weed, even if they are a pretty weed. But for the time being they can stay.

Also staying are the Poppys, but these are not the California Poppys I planted.

Their scarlet blooms add colour. But as I was taking photographs, I noticed the insect life on them. Here is a just emerged Katydid.

A couple of weeks ago I included a photo of the flower of a wild Salsify.

This week the seed heads have all opened. They are like a giant dandelion, and as soon as there is some wind, these seeds will blow away, to become next years flowers.

Citrus trees are unusual in several respects. One is that at any given time in the year, they will simultaneously have flowers, juvenile fruit and mature fruit, all on the tree at the same time.

This is a sweet Meyer Lemon. Fruit are almost round and without the characteristic pointed ends of lemons and they are sweet.

The flowers are highly fragrant and have a distinctive purple base.

So while the orchards have been left, nature is very much alive an well and if the insect life is anything to go by, thriving. NRC